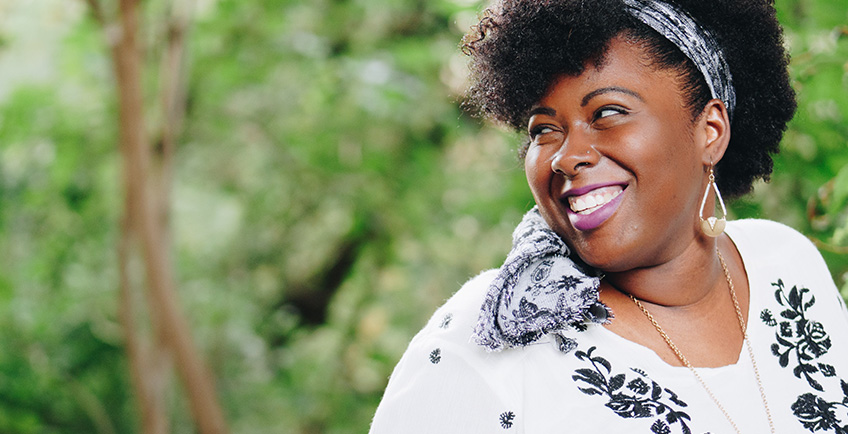 The freedom that comes with owning a home

In the same way as buying a home is not a matter of a singular transaction but a process that spans over time, our relationship with clients doesn’t always end when they sigd the contract of their new home: we have been fortunate enough to establish lasting relationships with several clients who have approached us to seek help to achieve their dream -and keep it alive.

Ms. Coakley is one of those South Florida residents we have been fortunate to walk with for several years now. In 2009, she took the homebuyer workshop with us, which we offer to all those searching for information about acquiring their first home. Back then, we guided her through the process and helped her purchase her home through a mortgage loan that, combined with other programs, enabled her to leave the renter’s life behind. For 12 years now, Ms. Coakley has happily owned a home in the City of Miami- within the Midtown neighborhood.

“[Back then,] I was a renter, and becoming a homeowner was a whole big change. The expectations of being a first-time homeowner are different, and also the challenges that being a homeowner brings because I never had one [a homeowner] in my family. I was the first one in my immediate family to buy a home.”

And like Ms. Coakley, many NHSSF clients are stepping into homeownership for the first time. Therefore, the information they receive from our workshops and counseling sessions have an additional value since, in a high percentage, they might be the first in their family environment to learn all the ins and outs of becoming a homeowner:

“You all walked me thru and guided me and help me with all of the steps I needed to take. If it wasn’t for you, I do not know what I would have done.”

And like almost every experience in life, get educated about something is a continuum. After acquiring her home, Ms. Coakley kept taking post-purchase classes with us (in 2010, 2012, and 2013). At that time, we offered “home assessment” courses to educate homeowners relating to the constant need for supervision of their new assets. Now, we continue to provide “post-purchase” classes to prevent homeowners from falling into foreclosure or showing homeowners the road to financial sustainability after the home purchase.

Talking about her experience as a homeowner during COVID-19, Ms. Coakley shared:

“It was a great relief because, during the pandemic, a lot of people fell behind since they couldn’t afford to pay the rent.”

She has kept up with her mortgage payments. By working hard, she has been able to avoid applying for any forbearance program in the market.

After 12 years of enjoying her home, Ms. Oakley seems interested in making some improvements, though. In this sense, she’s an ideal candidate for the Resiliency & Energy Efficiency loan program that we’re about to launch. Her home already has impact windows, but she would like her appliances to be energy efficient and thus enhance her home’s energy consumption.

When asked about what is, in her opinion, the most remarkable thing about owning your home, Ms. Coakley concludes our conversation with a firm conviction:

“I love being a homeowner; I wouldn’t take it back. It changed my life because I have the freedom into owning. The freedom into doing things I want to do to my own home.” 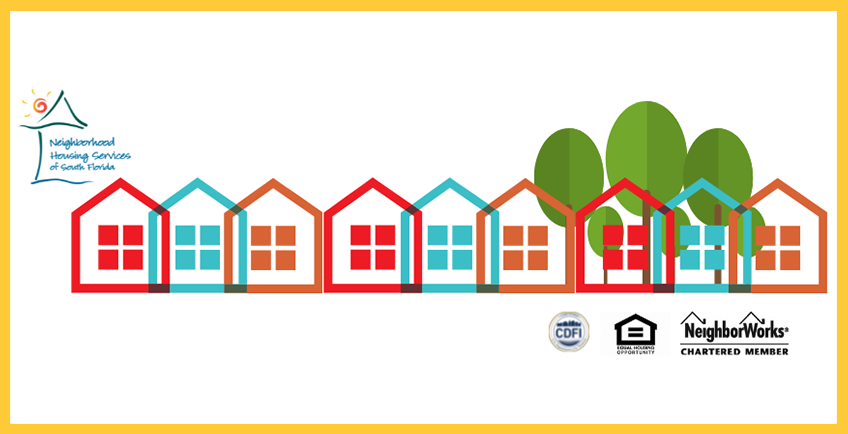 Shape the future with us: Energy efficiency & resiliency survey

Some exciting news is coming right from the oven: we are currently in the process of finalizing our new Resiliency and Clean Energy Lending Program! The program’s ultimate goal is to help homeowners retain the value of their homes by implementing protection measures against extreme weather events, and improving their houses’ overall energy conservation capacity. Furthermore, the program aims to facilitate solar and other clean energy measures to help reduce the operating costs of homes.
To better understand how we can serve the community and ensure our lending product fits the needs of our community, we created THIS SURVEY. In less than 5 minutes, you can help us shape the future of our communities by providing us critical data about the most efficient resiliency & clean energy measures needed across South Florida and the equitable financial paths to put those measures in your hands.

By helping communities of low- to moderate-income participate in the economic development of clean energy and resiliency measures, overall equity and environmental impact, we’ll bring holistic development into our community and throughout the South Florida region. In addition, this survey will help ensure that we can reach everyone who wants to improve their homes, their quality of living and take part in the climate fight have their voices heard.

The lending program that would come out of THIS SURVEY will be funded by a grant awarded to us by OFN to support CDFIs, who like us, work on expanding affordable renewable & energy efficiency financing products and services that benefit the most underserved families in our communities.

Give us 5 minutes of your time and share your input with us.

And if you have other family members, friends, or colleagues who own their home, share the survey with them to ensure we reach a broad and diverse group of voices, SHARE THE SURVEY https://nhssf.org/online-energy-efficiency-survey/.

And thanks for being our ally and helping to shape the future of South Florida with us! 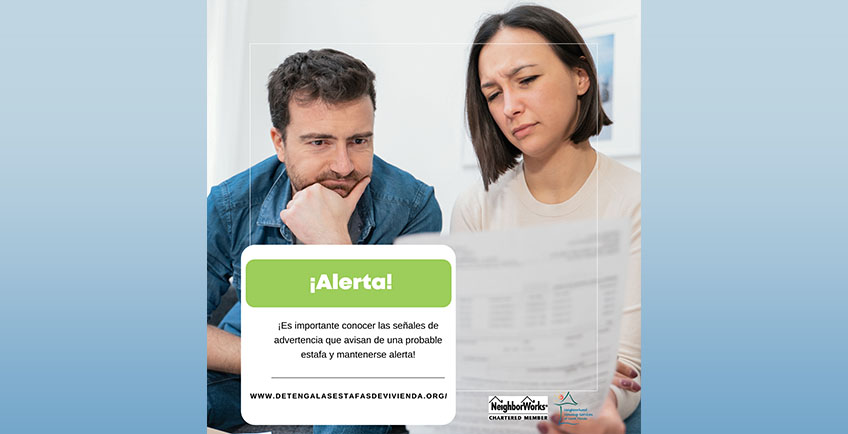 Symphony Malveaux, community relations coordinator for Louisiana’s Mid City Redevelopment Alliance, had been reading up on home scams as she prepared to bring awareness to her community through NeighborWorks America’s Stop Home Scams initiative. Then she realized she’d nearly fallen victim to a scam herself.

Malveaux had inherited her family home and was trying to figure out how to make back payments when she received a letter telling her that for $500, a company would adjust payments and in just months, the home would be hers.

At that emotional time, the offer seemed like a lifesaver; she was ready to grab hold, she says. But as she began to research the company, it didn’t appear to exist. She phoned repeatedly. No one returned her calls. She’d come close to being scammed, she says, and she wrote about her experience for Mid City’s website. “I wanted to show it could happen to anyone.”

As she continues to publicize the Stop Home Scams initiative, which NeighborWorks began in January 2021 with support from the Wells Fargo Foundation, she continues to connect with her community. Recently, she heard from woman who had inherited a home and was having trouble with back payments. “It was just like me,” says Malveaux, who ended up selling her inherited home to a family friend. “We were able to connect and offer resources. It’s good to be able to have a personal story we can share with people. We can tell them, ‘You’re not alone.'”

Raising awareness about scams – in Spanish

Juan Carlos Gordillo, marketing and communications coordinator for Neighborhood Housing Services of South Florida knew how important it was for members of the community he worked with to get information about scams in their native language. He had seen similar outreach by healthcare organizations offering vaccines.

“Here in South Florida, it’s super important,” he says. “There are a lot of people that don’t speak English – or don’t speak it that well. They won’t pay attention to that information unless it’s provided in their own language. Without it, they might miss crucial information.”

In the South Florida region he serves, a significant portion of the population speaks Spanish (1.7 million) or Creole (more than 100,000). In that context, Gordillo began translating information about scams into Spanish as he publicized the Stop Home Scams initiative for the nonprofit’s social media pages. Last month, NeighborWorks released a Spanish version of its Stop Home Scams website, hoping to protect as many individuals as possible from mortgage and rental scams.

Gordillo, who began sharing that information, too, says NHSSF is now looking at hiring a Haitian Creole translator. Meanwhile, NHSSF continues to create public awareness of housing and mortgage scams, which are on the rise across the country, exacerbated by an economic downturn caused by COVID-19.

So far, his clients haven’t reported scams related directly to housing, he says, but some residents – and even staff members – have been approached with other types of scams, often via text message. The NeighborWorks initiative talks about how to report scams to the authorities.

A scam scare in South Dakota

Maureen Nelson, senior program director at Grow SD, says a resident in his 80s came to her recently holding a letter he’d received on a pink piece of paper. “Final notice,” it said, demanding that he renew his home maintenance contract. “The pink paper made him nervous,” she says. “He didn’t have a contract and he doesn’t need one. I told him it wasn’t a good investment.”

Nelson says the letter was a good reminder of the type of scams that are out there. Grow SD is working to raise awareness of home and rental scams as part of the Stop Home Scams initiative. “People have to keep seeing it; they have to keep hearing about it,” Nelson says. Grow SD is constantly putting messages about scams on social media. They also sent press releases to newspapers across the state.
A grant from NeighborWorks, with support from the Wells Fargo Foundation, helps with outreach. “Ask questions. That’s the biggest thing I tell people,” Nelson says. “If you get something in the mail that doesn’t make sense, ask about it.”

This story was originally posted on NeighborWorks America’s website