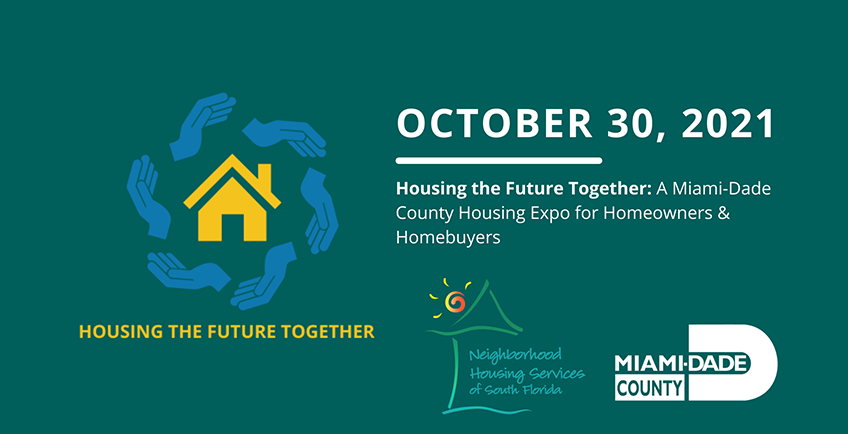 MIAMI, FL (September 20, 2021) – Today, Neighborhood Housing Services of South Florida (NHSSF), announces the Virtual Homeowner & Homebuyer Expo – Housing the Future Together! In partnership with the Miami-Dade County department of Public Housing and Community Development (PHCD), this consumer-oriented housing expo will offer Miami-Dade County residents a wide range of informational workshops and a vendor exhibit under two learning tracks; a Future Homebuyer track that will provide valuable resources to help put prospective homebuyers on the right path and a Current Homeowner track that will give existing homeowners the tools they need to uphold their investment. The virtual event, created to promote economic recovery following the Covid-19 pandemic, will take place on Saturday, October 30, 2021, from 9:15AM to 5PM EST. Registration is free and open to the public.

“We are thrilled to be cohosting this event with the Miami-Dade County PHCD,” says Kim Henderson, President & CEO of NHSSF. “This is the first time we are offering two different learning tracks in order to better serve our community. Whether you’re working toward buying a home or looking to protect your existing home, this event has something to offer. Attendees will have the opportunity to participate in valuable, financial workshops and shop from over 7 lenders and 23 vendors all under one virtual roof,” continued Henderson. “By educating our residents about the resources available to them, we are empowering them to become responsible homeowners.”

Building on the success of previous housing fairs, the goal of this event is to help inform low to moderate-income residents about the home buying process and put them on the path to homeownership. The Expo will offer a variety of learning opportunities through a series of workshops guests can elect to participate in. Among these will be a First Time Homebuyer’s Workshop that will provide participants with an HCA First Time Homebuyer Certificate. Obtaining this certificate through a HUD-certified housing counseling agency is required to qualify for government sponsored down payment assistance and to acquire a loan from a community lender. It is also a great way for first-time homebuyers to learn more about the homebuying process. The class will be offered in English, Spanish and Haitian-Creole. Other standout workshops include the Realtor’s Roundtable and the Lender’s Roundtable where participants will hear from industry experts about the best opportunities available to them in today’s market. For homeowners, there will be educational sessions about how they can incorporate more environmentally friendly features into their home renovation plans, as well as live demonstrations on solar panel installation, DIY home repair, gardening, energy efficiency improvements, etc.

Below is a list of confirmed workshops. All sessions are subject to change.

“The Miami-Dade County Homeowner and Homebuyer Expo is a crucial part of our county’s response to the impact the COVID-19 pandemic has had on our residents. It’s a way for us to help our community recover and maintain housing stability,” says Michael Liu, Director of the Miami-Dade department of Public Housing and Community Development (PHCD). “Residents looking to educate themselves about the home buying process or that need assistance with major obstacles such as how to qualify for community lending programs or down payment assistance will find this event incredibly helpful. We cannot wait to welcome our community,” continued Liu.

Registration for the Virtual Homeownership & Homebuyer Expo is required and now open. Residents must visit https://housing-the-future-together-expo.vfairs.com to register and for more information.

As one of the top-ten largest housing authorities in the nation, Miami-Dade Public Housing and Community Development manages over than 7,000 public housing apartments and provides housing assistance to more than 18,000 families through the federal Section 8 program. PHCD also provides support services to our residents including assisted living facilities for the elderly and self-sufficiency programs for our tenants. PHCD relies on federal and state grant programs for funding and works with the U.S. Department of Housing and Urban Development's (HUD) on our public housing and, with the State of Florida, the development of affordable housing.

Established in 1978, NHSFF is a certified Community Development Finance Institution (CDFI) and an accredited community development nonprofit serving South Florida residents for over 40 years. NHSSF is committed to advance prosperity for all South Floridians through Lending, Real Estate Sales, Housing Development, Home Buyer Education & Counseling, and Community Transformation. NHSSF is also a chartered member of the NeighborWorks® America. In this capacity, we are part of a nationwide network of over 240 chartered community development organizations and one of the twenty that serve Florida residents. NHSSF provides its full spectrum of homeownership services in English, Creole, and Spanish to assist potential homebuyers in reaching their homeownership goals. 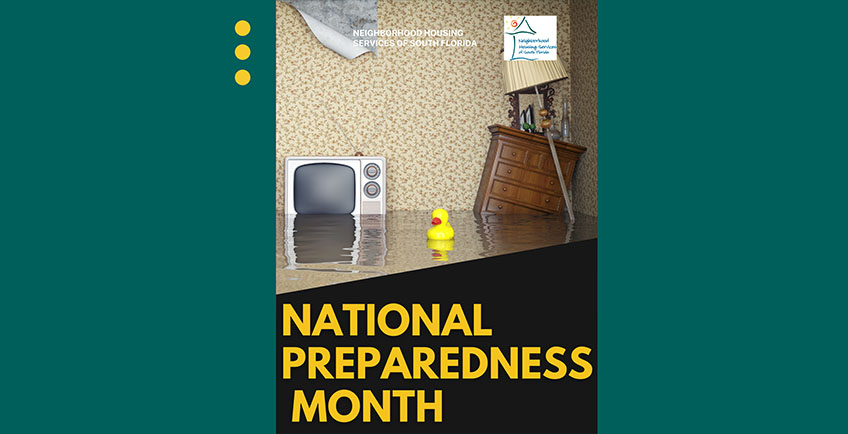 September is National Preparedness Month, a time to prepare for disasters or emergencies that could happen at any time. Neighborhood Housing Services of South Florida (NHSSF) is spending the month putting the finishing touches on a new loan program that will help families prepare their properties for emergencies, says Juan Carlos Gordillo, marketing and communications manager for the NeighborWorks network organization. The focus will be on creating more resilient and energy-efficient homes. Hurricane Ida, which recently brought a deluge of rain to the Gulf Coast, highlights the need for that resiliency.

Using funding from the Opportunity Finance Network, the national association of  Community Development Financial Institutions (CDFIs), NHSSF will offer loans to help residents protect their homes against the heat and the storms that have hit South Florida hard these last few years. Residents can also use loans for new windows, energy efficient appliances, and more, to help save money while helping the environment.

“Florida is really in a hot spot, due to climate change and flooding,” Gordillo explains. “We are seeing stronger hurricanes and recurring extreme weather events. These loans will help homeowners make improvements to face the impact.”

The program will be especially beneficial for low-income homeowners, who have a difficult time coming up with financing for improvements that can help protect their homes or lower energy bills, Gordillo says. “We want to give low-income homeowners access to green technology.” Residents could buy new, energy efficient refrigerator, or improve the insulation of doors and windows to protect their homes, for example. They could purchase a generator to keep things running when the power goes out, after a hurricane has touched land.

Heat has been such a challenge in Florida that Miami-Dade hired a heat officer this year, the first in the nation. “We want to help there, too,” Gordillo says, adding that loans could be used to get new air conditioning systems, or to elevate air-conditioning systems on platforms, to protect them from flooding.

NHSSF conducted a survey over the past two months to see how to better address homeowners’ needs. “We asked them: If you had the opportunity to make improvements, what would you like to do? Would you need money? How much would you need?” One hundred percent of survey respondents stated they would make energy-efficient improvements if they had financing options available. Rising energy costs and combating climate changes appeared to be the largest motivators. The three things residents wanted most included: solar panels, floodproofing, and energy-efficient appliances. For resiliency upgrades, residents listed generators as the item they needed most, followed by floodproofing and impact glass windows. “Flooding is a constant hazard for many of our residents,” Gordillo explains. “Every hurricane season, they face that challenge.”

NeighborWorks organizations across the country are becoming increasingly agile in helping communities and homeowners respond to natural disasters, regardless of the geography.  “Whether the disasters are related to floods, fires, earthquakes, or drought, our network is developing locally-tailored solutions like this loan program in Florida to assist residents in maintaining their individual and community’s social and economic fabric and resilience as future events occur,” according to Sarah Kackar, director of Rural Initiatives at NeighborWorks America.

At the end of August, Jim Murley, chief resilience officer for Miami-Dade County, had his eyes glued on the flooding in Louisiana and New York. “It could have happened to us,” he says, adding that Florida is often considered “ground zero” when it comes to the effects of storms and of a changing climate. “We have to prepare. We’re constantly preparing and using the resources we have as a public entity.” When nonprofits like NHSSF are able to compliment that preparation, it makes a difference, he adds.

“We want homeowners to be able to access capital to make the improvements we know they need,” says Murley. The county government works with weatherization and other programs, but Miami-Dade has 34 municipalities within its boundaries. “There are never enough funds. We want to expand the choices citizens have to make improvements to their homes so they can withstand impacts of shock, like hurricanes.”

Neighborhood Housing Services of South Florida is striving to be one of those choices. Gordillo estimates that loans through the new program will average $7,000 each. That can make a difference in protecting a home, he relates. Staff will continue to evaluate the program after its launch to see what other possibilities become available. 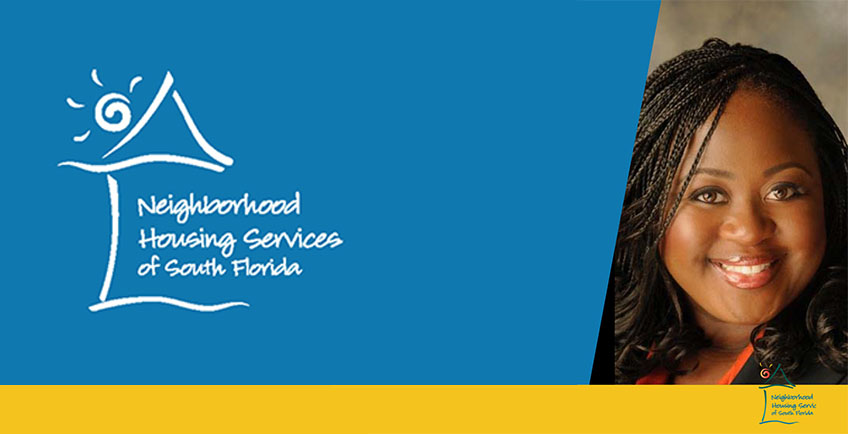 Today, the Community Development Financial Institution (CDFI) Fund, a division of the United States Treasury announced its awardees to participate in a new initiative between the CDFI and AmeriCorps an agency known for making “service to others” part of our national culture. NHSSF is honored to be among just three organizations selected from a nationwide grant process selected to deploy 10 AmeriCorps members in localities facing gentrification pressures, affordable housing shortages, poverty, financial services and food deserts among other pressing social and economic challenges.

This collaboration between AmeriCorps and the CDFI FUND is one step forward on what I hope will be a movement not just a moment in history but a movement to address the economic divides that threaten our democracy and our collective hope for a better future.

This year funding to CDFIs in response to C19 recovery is unprecedented and will likely exceed $1 Billion spread across multiple federal agencies to spur economic activity in the most critical sectors of our economy. I believe those of us working in and adjacent to public service are doing God’s work in making this experiment in democracy and an open economy work for all Americans. NHSSF is not only announcing how honored we are to be selected but also making it clear we can’t do this work alone. Our banking partners and other stakeholders will be instrumental in the success of this initiative.